The best years of her life | Fond memories of blindfolded prisoners

The excellent Hebrew blog “Sachim” (kinda like the Israeli word for “mates”), which tracks the character of the young, pseudo-liberal Israeli mainstream, published a selection of pictures from the Facebook profile of one Eden Abergil, a recently discharged IDF woman soldier. The album, titled “Army.. the most beautiful time of my life :) ”  begins with fairly ordinary stuff: 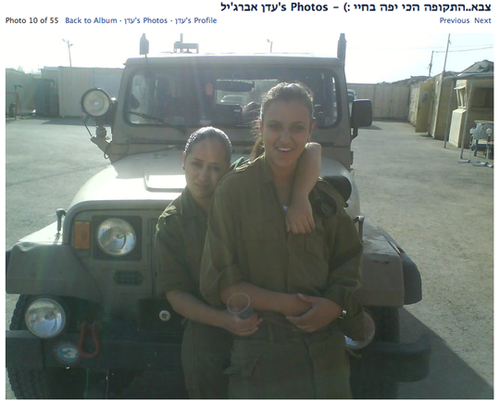 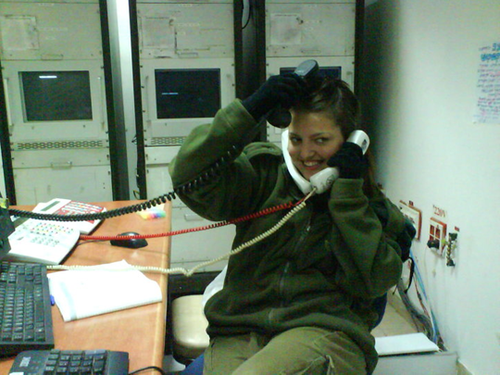 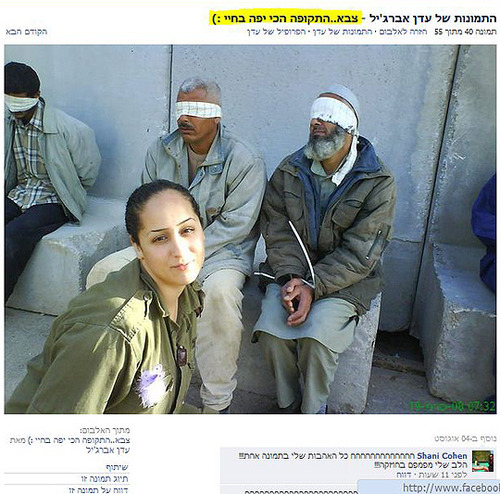 Comment from Shani Cohen: "LOL all my loves in one picture!!! My heart is pumping hard!!!" 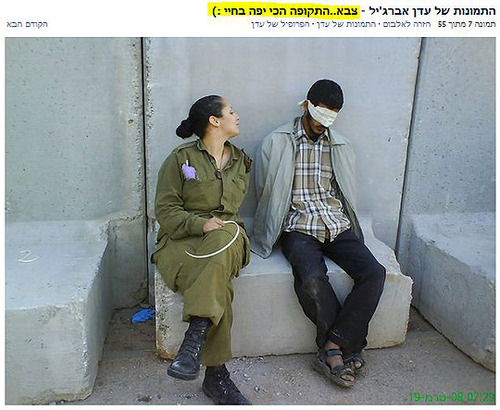 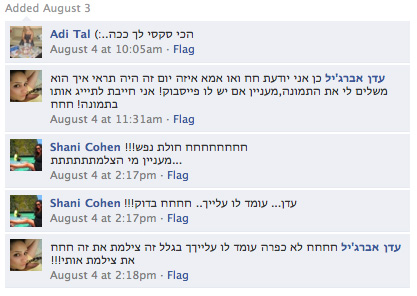 Eden Abergil: “Yeah I know lol mummy what a day it was look how he completes my picture, I wonder if he’s got Facebook! I have to tag him in the picture! lol”

Shani Cohen: “LOL you psycho… I wonder who’s the photographerrrrr”

Eden Abergil: Lol no honey he’s got a hard-on for youuu this is why you took that picture lol you took my picture!!!!”

In case you thought/hoped this was satyre, here’s the original album, [update 5pm: now blocked] and here’s a screen capture: 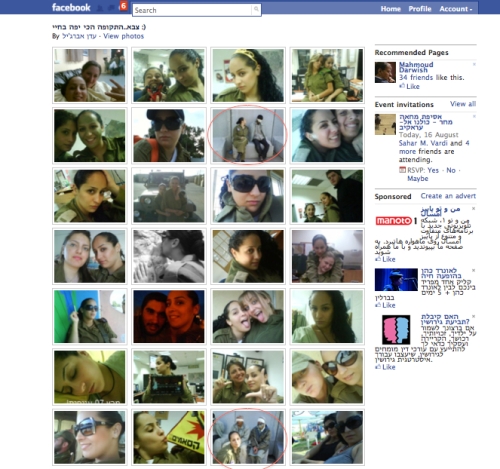 Theses pictures really do speak for themselves; of course, Abergil is no better or worse than thousands of other Israeli soldiers, and I’d like to hope a few years from now she’ll be appalled, rather than amused by the memories. We may and should cut slack to the effect of conflict on a young person’s sensitivity and moral standards – Abergil by no means should be scapegoated for all excesses of the IDF – and remember efforts by separate individuals, even in uniform, to make an intolerable situation more bearable.

But we should always remember  that this, only this and nothing else, with its ignorance, naive bigotry, and blunt power-play – is the real face of our occupation of the West Bank:

Israeli blogosphere and third sector are already abuzz about this; I’ll update this post as soon as the first official complaint is filed or new information comes in.

Update 3:20pm: Ynet and Globes caught up with the story. Globes carries the first comment from the IDF spokesperson:

On the face of it, this is blunt, ugly behavior by the soldier. Considering the fact the soldier was discharged last year, all details of the case were transferred to her commanders, for further treatment.

Ynet has a statement from the Public Committee Against Torture:

‫”‬Pictures of this kind reflect the norms accepted among Israeli soldiers at checkpoint, and the treatment meted out to Palestinian detainees.”

Clarification: I did approach Ms Abergil for comment. No reply so far.
Update 5pm: Abergil responded to blogger and musician Dan-ya Shwartz, saying: “I don’t understand why it’s any of your business to go prying through people’s Facebooks and always find the bad. [Go] deal with more important matters. “
Update 5:30pm: Abergil changed her privacy settings, blocking her album to non-friends.
Update 5:45pm: This has to be the quickest internet shit-storm I ever watched unfold in Israel: FakeEdenAbergil just went on air.
Update 6pm: The story is now the main headline on Haaretz.com
Update 7pm: Abergil replied to a query from Lisa Goldman: “I don’t speak to lefties.”
Part II: Breaking the Silence release worse photos | Part III: Abergil gets meme treatment, declares she would be happy to massacre Arabs.